Coworking is an arrangement in which several workers from different companies share an office space, allowing cost savings and convenience through the use of common infrastructure, such as equipment, utilities, and receptionist and custodial services, and in some cases refreshments and parcel acceptance services.

From Wikipedia, the free encyclopedia
Jump to navigationJump to search 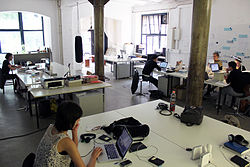 A coworking space in Berlin

Coworking is an arrangement in which several workers from different companies share an office space, allowing cost savings and convenience through the use of common infrastructure, such as equipment, utilities, and receptionist and custodial services, and in some cases[1] refreshments and parcel acceptance services. It is attractive to independent contractors, independent scientists, telecommuting and work-at-home professionals, and people who travel frequently. Additionally, coworking helps workers avoid the isolation they may experience while telecommuting, traveling, or working at home,[2] while also eliminating distractions. Some coworking spaces charge membership dues.

Coworking is not only about the physical place, but about establishing a community. Its rapid growth has been seen as a possible way for city planners to address the decline of high street retail in urban centres.[3] Its benefits can already be experienced outside of the physical spaces, and it is recommended to start with building a coworking community first before considering opening a coworking place.[4] However, some coworking places don’t build a community; they just get a part of an existing one by combining their opening with an event which attracts their target group.[5][4]

Real-estate centric coworking spaces are about selling desks first, with building community as a secondary goal. Players target freelance professionals, remote workers, and small to medium enterprises (SMEs) who need a space and seek a community with a collaborative spirit. Customers also often benefit from professional services such as printing or incorporation or consulting.[6]

Coworking is distinct from business accelerators, incubators, and executive suites.[7] These spaces do not fit into the coworking model because they often miss the social, collaborative, and informal aspects of the process. In coworking, management practices are closer to that of a cooperative, including a focus on community[8] rather than profit.[9] Some coworking participant are also participants in an unconference like BarCamp[10] and other related open-source participatory technology events.[11][12]

Between 2006 and 2015, a few studies have shown the number of coworking spaces and available seats have roughly doubled each year.

Co-Working was first conceptualized by Sunshine Suites. The company opened its doors in October 2001, founded by Cheni Yerushalmi and Joe Raby. From the beginning, the idea of community was central to Sunshine’s efforts. It arranged ski trips and upstate hikes and negotiated group discounts on gym memberships, car rentals, and health insurance. Eventually, Sunshine bought a cabin in Vermont for use as a corporate retreat, and started a softball team.[13] “It was a lot more than an office space,” Yerushalmi recalls. “Everybody knew everybody. It was a really special place.” If someone fell behind on their payments, for instance, instead of evicting them, the founders worked the phones, drumming up a business to help the struggling company get back on its feet, as the New York Times noted in a profile of the company in 2004.[14]

Coworking, as we experience it today, was preceded by European hacker spaces of the 1990s, where programmers would exchange skills and best practices.[15]

Some coworking places[16] were developed by nomadic Internet entrepreneurs seeking an alternative to working in coffee shops and cafes, or to isolation in independent or home offices. A 2007 survey showed many employees worry about feeling isolated and losing human interaction if they were to telecommute. Roughly a third of private-sector and public-sector workers also reported that they did not want to stay at home during work. Another major factor that drives demand for coworking is the growing role of independent workers.[17]

Toong’s design in Hanoi is a blend of cultural features and modern details.

Coworking in Asia has become very popular as space is limited in regions like China, Hong Kong, India, the Philippines, Saudi Arabia, Singapore, Taiwan, and Vietnam.[18] The major metropolitan cities in each of these regions are every day coming up with new coworking ideas and spaces, promoting emerging startups and business to adopt the trend. Research from commercial brokerage firm JLL found that flexible work space in Asia-Pacific, including both serviced offices and coworking, surged 150% from 2014 to 2017.[18]

In Pacific countries such as Australia and New Zealand, coworking has been made popular over the last 8 years as the prices of commercial spaces and bills rise, with coworking being up to 25% cheaper for most freelancers and businesses.

Coworking space in Makati, the Philippines

In Hong Kong for example, dozens of coworking spaces have been set up to foster the rapidly growing startup community; according to Forbes it is among the leading tech locations in the world, along with New York City and Silicon Valley.[19] Spread across almost all districts, coworking places can be found everywhere while the majority of places are situated on Hong Kong Island and there predominantly in the Central and Sheung Wan districts.[citation needed]

The Malaysian state of Penang, long regarded as the Silicon Valley of the East, has also witnessed an increase in coworking spaces.[20][21] Aside from privately owned startups, the Penang state government has embarked on a drive to convert colonial-era buildings in the capital city of George Town into coworking spaces.[22]

As well as tech startups, coworking is becoming increasingly common amongst digital nomads in Asia.[23] A 2011 survey found most coworkers are currently in their late twenties to late thirties, with an average age of 34 years. Two-thirds are men, one third are women. Four in five coworkers started their career with a university education. The majority of coworkers work in creative industries or new media. Slightly more than half of all coworkers are freelancers.[24]

Coworking spaces in India are also on the rise.[25] According to a 2017 report by real estate firm CBRE, there are 350 shared office operators present in India, like Innov8, wework, 91springboard, VCN coworking, Awfis, Incuspaze and many more spread across more than 800 locations. Leasing activity by coworking and business center operators more than tripled on 2016. 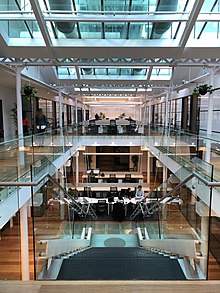 The Australian market has also continued to grow. Global players such as WeWork and Spaces have entered the market, challenging locally owned and operated companies. With many independent operators opening smaller specialist sites (including in rural[26] and regional areas of the large country), some larger providers have expanded nationwide, with the distance between major cities an asset to both the coworking provider and the community. 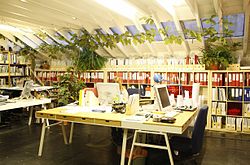 Nowadays, the U.K. is among[weasel words] the most responsive European country to the idea of collaborative working, with a special focus on London. In the city, the Shoreditch area leads the coworking market, not only for the large number of coworking places it offers but also for the variety of places that exist to fit the differing needs among start-ups, entrepreneurs and freelancers.[31] Camden Collective is a regeneration project in London that re-purposes previously vacant and underused properties that opened its first ‘wire-less, wall-less’ coworking space in 2009.[32]

In June 2013, the U.K. Government announced it would be applying coworking principles to a new pilot scheme for its ‘One Public Sector Estate’ strategy covering 12 local authorities in England, which will encourage councils to work with central government departments and other bodies so that staff share buildings. This will enable the authorities to encourage collaboration as well as re-use or release property and land deemed surplus to requirements, cutting spending and freeing up land for local development.[33]

Coworking is also becoming more common in continental Europe, with the startup metropolis Berlin being a major booster for this development.

This kind of working environment is not exclusive to big cities. Smaller urban areas with many young and creative people and especially university cities may offer coworking places, with Cowork Greifswald in Germany being one example. Cooperation between coworking spaces and academic environments are focused.[34]

Since Neuberg started the coworking movement in 2005, San Francisco continues to have a large presence in the coworking community and is home to a growing number of coworking spaces.[35] Also in the Bay Area, Anca Mosoiu established Tech Liminal in 2009, a coworking place in Oakland.[36]

The coworking model for office space is extremely popular in Miami. In fact, a 2018 study done by Yardi Matrix, recognized Miami as the US city with most co-working spaces per square foot.[37] Coworking has also spread into many other metropolitan areas, with cities such as Seattle, Washington,[38] Portland, Oregon,[39][40] Toronto,[41] and Wichita, Kansas[42] now offering several coworking venues.

The New York coworking community has also been evolving rapidly in places like Regus and Rockefeller Group Business Center. Several new startups like WeWork have been expanding all over the city. The demand for coworking in Brooklyn neighborhoods is high due to the rise in the millennial workforce; nearly one in 10 workers in the Gowanus area work from home.[43] The industrial area of Gowanus is seeing a surge in new startups that are redesigning old buildings into new coworking spaces.[44] In Brooklyn, in 2008, the first green-focused coworking space in the US, called Green Spaces, was founded by Jennie Nevin, and it expanded in 2009 to Manhattan and Denver and has been a driving force for green entrepreneurship through the collaboration of coworking.[45]

New models of coworking that go beyond the original concept of shared office space have also been established. For example, CoWorking With Wisdom, in Berkeley, California, combines coworking with meditation, mindfulness, and yoga programs,[46] The Wing was founded for “the advancement of a certain type of woman”,[47] and Work and Play in South Orange, New Jersey has onsite childcare for entrepreneurial parents.[48] Coworking spaces with a religious aspect include Epiphany Space, a Los Angeles space for artists, and SketchPad, a Chicago space for Jewish not-for-profit organizations.[49]